When you think of real-time strategy (RTS) games, you probably don’t think of increasing sexual tension ending in a metaphorical climax, but that’s because you aren’t Andy Schatz, CEO and Lead Designer of Pocketwatch Games.

Okay, for everyone’s sake, let’s back up a bit here.

The above composition, arranged and written by the Grammy nominated composer Austin Wintory, scorer of such games as Journey and The Banner Saga, is titled “Archimedes’ Tango”. It arrives hot off of Pocketwatch’s brand new video game titled “Tooth and Tail”, a game readily described by their team as a “popcorn RTS”.

If you’re wondering what a popcorn RTS is, it’s the result of Pocketwatch’s hard work to make RTS games - a genre known for its complexity and long gameplay lengths, akin to a game of Risk - into a more streamlined, quickly paced and captivating spectacle. A game of Tooth and Tail should only be about 10-15 minutes, with people chanting, “Go mice!” all throughout.

“That’s really how the whole soundtrack came to be. It’s about dance and the tension of ballroom dancing.”

“When we started working on it, we started with the idea that (the Tooth and Tail soundtrack) was supposed to evoke the golden age of real time strategy”, says Schatz. “And for me, the (RTS) soundtrack that stands out is the original ‘Command & Conquer’ soundtrack…we started there.”

Some background on that influence: Command & Conquer is a RTS game from 1995 whose clout runs deep, among its many contributions to the genre including full-motion cutscenes, real-world themes, and yes, a bizarre and bombastic suite of music that runs the gamut between raucous rock and heavily sampled trip-hop. Its popular sequel, “Command & Conquer: Red Alert”, perhaps also exerts some influence here, with its heavy use of Russian, militaristic overtones.

Yet as that 1995 soundtrack is literally just an album of full length songs, how could a free flowing, frantically paced (and short) game effectively use that as its starting point?

“We approached the soundtrack from two angles: one was the theme of the game, and the other was the mechanics of the game. Bottom up, top down. We tried to make the music interact with those two angles of the game."

Let’s analyze this by starting with the themes of the soundtrack, all of which hit you over the head right from bootup: chanting, rising up, and total conflict. Schatz explains the game is inspired by Russian revolution, but starring tiny animals. And yes, you can basically hear the rodents rising up against acts of clergy conspiracy and the government sending off soldiers to fight in foreign wars.

To fully capture that vibe, Pocketwatch, in conjunction with Wintory and Power Up Audio, wrote almost exclusively with instruments that are era-specific: fiddles, violins, and “an old, crummy organ, like the kind you’d find in a Russian Orthodox church in the countryside.” With that pallette as their base, every arrangement was then tailor fitted to the four factions you can pick to battle with in the game.

“That’s really how the whole soundtrack came to be. It’s about dance and the tension of ballroom dancing.”

Let’s look at those factions and their dances. First, there’s the police, known here as the KSR, and the only place in the game where you can find march-like arrangements that evoke the more popular USSR, modern-like vibe. Their dance? It’s a strict and orderly waltz. For Bellafide, who represents the capitalist class, you’ll hear the structured whimsy of a tarantella dance while you play. And for Hopper, the proletariat class leader who gave her own arm to feed the hungry, you’ll come charging onto the scene with a rousing bar chant and sway.

Then there’s Archimedes, the star of the track we’re exploring. He is the clergy-rodent who Pocketwatch cheekily describes as “Ratsputin”, and whose tango influenced theme - the dance of sexual courtship, mind you - may seem like a bit of an odd choice for such a holy character. But this is where the relationship between the game’s themes and its gameplay mechanics shine brightest. 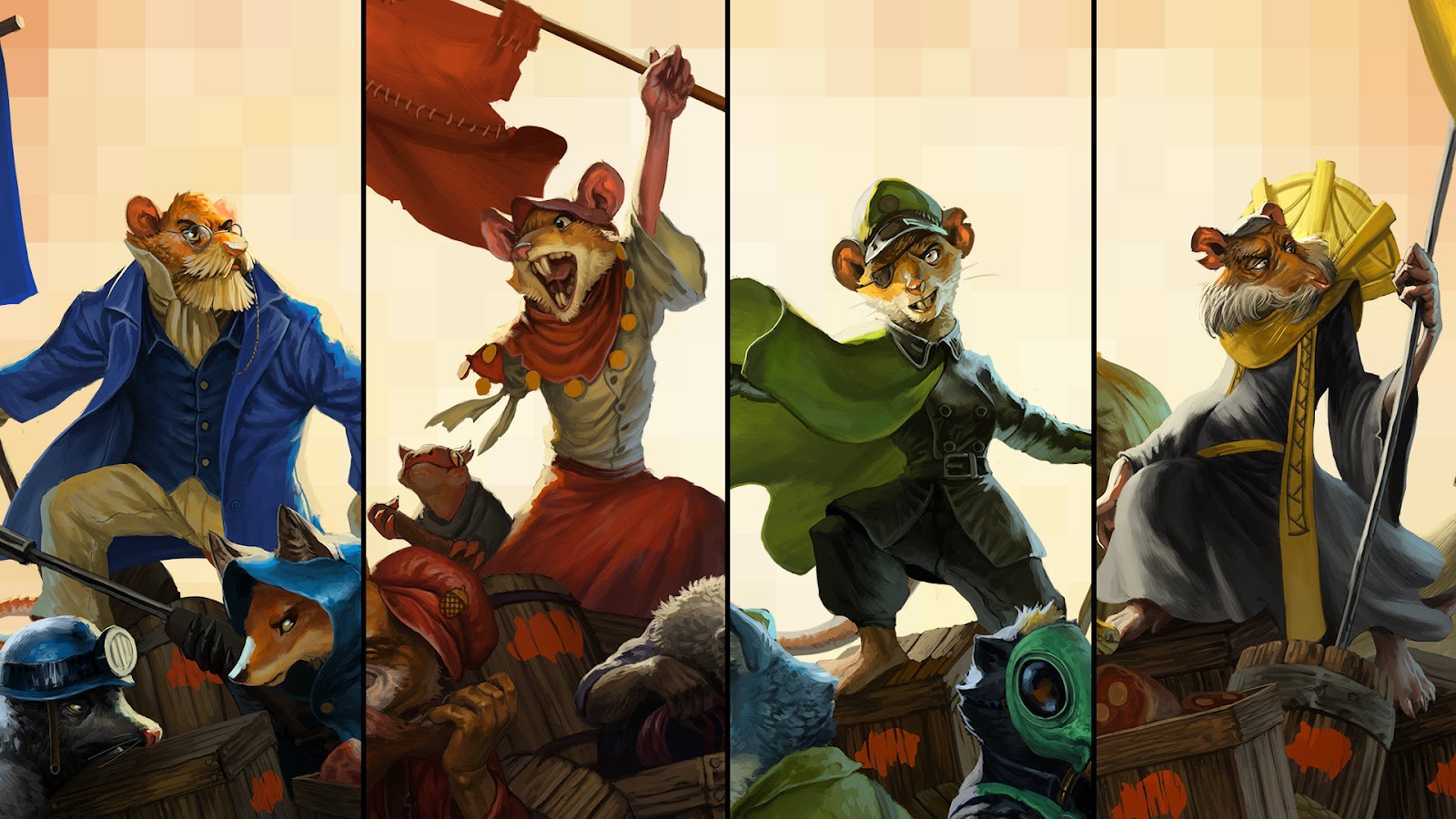 “A RTS is all about tension,” begins Schatz. “There’s usually a back and forth with armies pushing and pulling, and looking at each other, until at some point, the wave crashes, and one army completely overtakes the other.”

Listen to Archimedes’ Tango and it all makes sense how it can work for a RTS game. You’ll feel like you’re the one locked in embrace, moving back and forth, pushing and pulling, leaning in, then trying to pull away. That’s exactly what you do while you’re playing Tooth and Tail.

Those alluring wind instruments? That passionate, pleading violin? It’s a super ingenius use of sound that breaks away from your more average RTS soundtrack, a genre which more often utilizes either singularly aggressive themes or brooding background noodling. (That violin, by the way, is played by Sandy Cameron, fresh off her tour with Danny Elfman and Disney’s stage production of The Little Mermaid.)

More on that point, since the gameplay sessions of Tooth and Tail are short and sweet, it afforded Pocketwatch the opportunity to write to the gameplay, unlike a more lengthy RTS title might be able to. It’s really quite a clever move to interpret your typical RTS gameplay session as an interlocked dance that, at least in their game, sets the player in a heated back and forth, then builds and culminates quickly with a sudden and violent overtaking as the battle is won.

“Marrying the sexuality of tango with religious instruments like the organ (and) a very sensual violin turned it into this very weird mishmash of religion and cannibalism and sexuality. It’s just… a very odd piece”, Schatz gushed while discussing Archimedes’ Tango.

Tooth and Tail is available now on both PS4 and PC.

Alan is a feature writer who has contributed to Kotaku, Polygon, Nintendo Life and other gaming sites. He has a background in the psychology of creativity, professional Smash Bros. and over 20 years of gaming behind him. He gets yelled at daily for picking Hanzo in Overwatch.